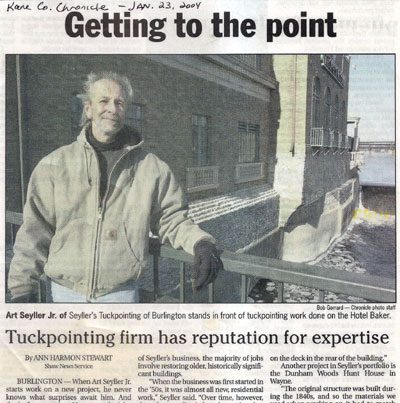 Text of Article Below

When Art Seyller Jr. starts work on a new project, he never knows what surprises await him. And that’s after more than 30 years on the job. As owner of the Burlington-based Seyller’s Inc. Tuckpointing & Masonry, Seyller takes on complicated projects that other masons would rather pass. Over the years, his firm has built a reputation for expertise in complicated, painstaking work. “I am continuously running into things that I haven’t encountered before.” said Seyller, who took over the family business started by his father and uncle in 1955. “It adds difficulty, but I like the challenges.”

While routine work such as residential chimney repairs still makes up a portion of Seyller’s business, the majority of jobs involve restoring older, historically significant building. “When the business was first started in the ’50’s, it was almost all new, residential work,” Seyller said. “Over time, however, the culture we live in has changed so that older buildings are valued more. People want to preserve things, not tear them down.”

Seyller’s Inc. Tuckpointing & Masonry recently completed work on the historic Hotel Baker in downtown St. Charles, built in the late 1920’s. “The majority of our work there involved stonework over the river,” Seyller said. “There was a lot of damage from moisture, and parts of the wall were bulging or falling out. We did some stabilizing and replacing of the stone, and tore a wall out and rebuilt it. “We also did some terra cotta patching on the deck in the rear of the building.”

Another project in Seyller’s portfolio is the Dunham Woods Hunt House in Wayne. “The original structure was built during the 1840’s, and so the materials we used when working on it had to match what would’ve been available then,” Seyller added. “For example, we used a lime putty mortar because there was no mortar with cement in it back then. For part of the project, we cut samples from the building and send them to a company which analyzed the mortar, then reproduced it.”

While Seyller’s projects provide plenty of on-the-job education, he able to take advantage of new restoration products on the market, which largely are a result of the recent upsurge in preservation efforts. “There are new products on the market now that make things easier,” he said. “Mortar can be sculpted to match the designs on a building. There are terra cotta patches that can be colored to blend in with the existing material on a building. “In the past, we were on our own,” Seyller said. “Maybe we realized we needed a softer mortar, but we had to come up with our own concoctions.” Even restoration seminars are springing up. “I’ve been doing this for a long time, and I read a lot of articles and things like that, but if a seminar comes up I’ll go or I’ll send my crew to it,” Seyller said.

Seyller’s Inc. Tuckpointing & Masonry typically employs a crew of between four and seven, most of whom have been with the business several years. “Having people that do their best is important,” Seyller said. “We’ve been able to build up a number of architects and contractors who recommend us, and that makes it easier to stay in business. When you continually do your best, people tend to come your way, not go away.”

Seyller’s provides maintenance and repair work for the cities of St. Charles, Elgin and DeKalb, and the firm has worked on the St. Charles fire station and the 1929 art deco style Egyptian Theatre in DeKalb.

Over the years, Seyller’s Inc. Tuckpointing & Masonry projects have won numerous awards. The McBride Building on Douglas Avenue in Elgin was awarded an Elgin Heritage Commission award, and Seyller’s also received a Brick and Mortar Preservation Award from the Landmark Preservation Council of Illinois for work on the 1846 Lincoln Homestead, a Kane County historic landmark in St. Charles.

A cobblestone house on DuPage Street in Elgin, possibly the second oldest structure in the city, earned the Elgin Heritage Commission Mayor’s Award and the Elgin Chamber of Commerce Community Improvement Silver Award. Seyller’s is in the process of beginning work on a Frank Lloyd Wright-designed home in Plato Center, which eventually will be turned into a bed and breakfast inn.

While public interest in building preservation has been on the rise, carrying out such work, which often is expensive, still is a challenge. “going to great lengths on a building can be costly,” Seyller said. I always get an idea of what a customer wants. We talk about what would be ideal, and also about what is practical, and I give cost ranges for that.

“Education comes in here. As the public becomes more educated about restoration work, they are willing to spend more, and good restoration work does cost more than just patching something. But if you don’t use the right product, a repair won’t last as long and will wind up costing more in the long run.”

Seyller and his crew often run into logistical problems, as well. “With the work on the (Hotel) Baker, a lot of which was located above the water, part of the question was how to get to it,” Seyller said. “There is a lot of effort that has to go in before you can even start the actual repair work, and a lot of what you do involves guesstamating, because you don’t know what is waiting for you until you tear into it.”

However, such discoveries are what Seyller enjoys most. “I can’t think of anything else I’d rather do,” Seyller said. “I like the challenges, and I like the satisfaction of seeing the end product.”